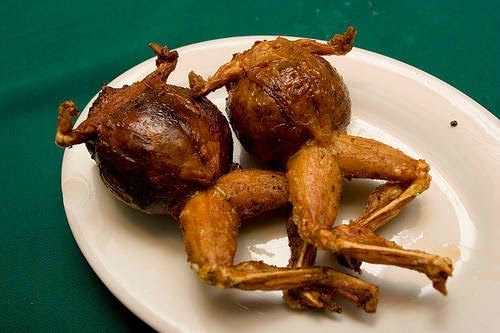 I’m having quite the crazy food adventure in Cambodia, and thus when the time arrived and I was presented with fried frogs, I jumped at the chance.

Generally speaking I have found Khmer cuisine to be a lot better than I had expected, or indeed remembered. You can read about my top Cambodian dishes here.

But, being the Street Food Guy I have also done my best to try as much weird Cambodian food as possible. Last week was the turn of “dude” bugs, and this week I was to get my frog jollies.

The tale went as thus. My Khmer friend told me that it was frog season, and did I want to try fried frog? I said “why not”, as is the standard from me, and explained I had already tried frogs with tamarind in Phnom Penh. Said Khmer friend laughed and explained this was “different”, they were not wrong.

The common frog used for said Khmer delicacy come from the rice fields, where legend has it they are easy to catch as when you shine a light in their eyes they freeze. Voila easily farmed frogs!

Now, if you have spent time in Asia, or indeed France you will have noticed frogs-legs, and indeed almost whole frogs on menus. These are flavored and meaty, but these tiny rice paddy frogs are consumed in a rather unique way.

Basically the whole frog is either deep fried, and grilled to a charred state of affairs, before being served en-masse and in large quantities. You then eat the frog whole, yep head, legs, and everything in between.

How does fried whole frog taste?

Well, a lot less bad than I had expected to be fair! Crunchy, a bit salty, but with no amazing flavor to blow you away.

I can imagine it, and indeed it is usually consumed with a hefty helping of beer as a drinking snack. At the very least I can say it tasted much better than Cambodian worms…..